Sleepless, Bored and in Pain, a Patient Watched

Just when it seems long past time for the age of memoir to be over — just when it seems impossible that any ailing person with literary inclinations could find anything new to say about illness, and the list of not-to-be-missed “patients are people too” books should be closed and locked — yet another book comes along.
Enlarge This Image 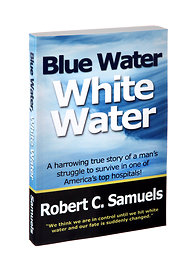 The details are slightly obsolete, to be sure: Mr. Samuels endured his many months of dire illness tethered to a respirator back in the 1980s, the Stone Age of modern intensive-care treatment. Nonetheless, his story from the wrong end of the tubes is timeless; the technology may evolve briskly, but the experience changes glacially, if at all.

A former beat reporter for The New York World-Telegram & Sun, Mr. Samuels covers his own story like a pro. He was healthy, 44, just returned from a trip around the world in December 1981, when he got out of bed one morning with a weak left leg. He wandered into the local emergency room half convinced he was imagining things.

By the next day he was completely paralyzed with a respirator breathing for him: Guillain-Barré syndrome, an autoimmune disease, was rapidly and efficiently stripping his motor nerves of their myelin sheathing, short-circuiting them all. Only his eyes still moved a little, from left to right. Nothing was wrong with his brain.

It would be many months before any part of him but his eyes moved again. He spent all that time in intensive care, first in his local hospital and then in one of New York City’s premier teaching institutions, a particularly grubby and uninspiring place. His mantra throughout, and the encouraging phrase on everyone’s lips: Guillain-Barré patients always get better.

That cheerful thought calmed his fear a little but did nothing for his constant discomfort. Completely immobile, incommunicado save for eye signals, sleepless and bored out of his mind, Mr. Samuels endured more pain than anyone might imagine — including, predictably enough, his own doctors and nurses.

His biggest enemy was gravity itself, as his flaccid muscles could no longer cushion his tender bones from any pressure, including that of mattress and pillow. Holding any position for more than half an hour meant misery. A tiny empty syringe left forgotten under his shoulder spelled agony. His primitive system of communication (eyes to the left for no, right for yes, back and forth for help) was seldom up to the challenge.

But others have covered the pain-and-helplessness story at greater length and complexity than Mr. Samuels. What makes his version so compelling is its mural of the medical personnel who wandered in and out of his shrunken world. With nothing to do but watch and remember, Mr. Samuels assembled the sketchbook of a professional observer, brisk, unsentimental, sardonic and altogether deadly.

His doctors were a well-meaning but erratic crowd, wise and foolish in equal measure. Their enthusiasms often seemed to have little to do with anything, certainly not the patient lying in front of them. One doctor guiding a fiber-optic tube through Mr. Samuels’s congested lungs was dazzled by their geography: “Right upper lobe,” she called out with passion. “Left lower lobe!” (No one in the room knew that Mr. Samuels was silently making conversation with his own list of lobes: his friends Werner and Nedra and their children, Susan, Janice and Chuck Loeb. Were the married daughters still Loebs? His mind spun a welcome momentary distraction.)

But it is the nurses who get the brunt of his attention, only because they ruled his days and nights. Seldom has anyone provided a better illustration of the simultaneous power and powerlessness of that complicated profession. Mr. Samuels’s good nurses struggled against the arbitrary constraints of their routines, while his bad ones drifted in a haze of marginal competence. Candy, Ingrid, Doria, Vinnie and the altogether fearsome Clare Ann — they are a terrifying, inspiring, nuanced and completely human bunch.

Mr. Samuels limits his own moralizing, but provides enough grist for any philosopher mulling over the essential conundrums of health care. Whose fault is it when a patient doesn’t get better? Some of his caretakers took every setback as a personal affront — a foolish reaction, or one that is essential to the enterprise? Some blamed the patient instead — misguided or brilliant psychology? There’s plenty to debate here, particularly because Mr. Samuels flouts all predictions and, sadly enough, does not get completely better, for all that he writes with the jaunty triumph of the survivor.

People with the terrible luck to get Guillain-Barré these days will be spared some of his misery. Certainly techniques of sedation and pain control are more sophisticated now, and accessories for the paralyzed body a little more streamlined and comfortable. But the essentials of the experience remain, and health care personnel who live through it in this book will appreciate the dreadful familiarity of the reflections from its author’s perfectly placed mirror.